The Random Multitap Delay is a delay effect that randomly, continuously changes the delay time between the input and output. The delay times are based on musical note durations – ¼ note, ? note, ? note triplets, etc.  My goal was to use random processes in a way that preserves rhythmic integrity — the output stays in time with the input and any other rhythmic elements in the music.

Internally there is a multitap delay, whose delay time is a multiple of the current rhythmic division. If you select ? for the tap length then the first will delay ? note, the second 2/8 , the third ? etc.

The effect switches randomly between the delays over time, effectively re-arranging the input signal in time, shuffling it up.  This is particularly effective on drums, because it will generate an endlessly varying rhythmic pattern that will still add up to the ear.

There are two identical delays for the left and right sides of the stereo signal. Since the current delay tap is chosen randomly, the right and left signals will be different even if all the controls are set the same.

It’s actually harder to describe what the effect does clearly than to understand what it does by tweaking the controls, and hearing the results. 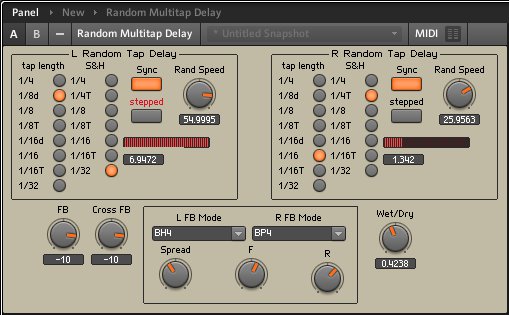 There is a hierarchy of chaos in the controls of the Random Multitap Delay.  I’ll list them from least chaotic to most chaotic:

Sync and Stepped On

Sync On, Stepped Off

Every rhythmic division a fractional value is chosen, that will select a blend of 2 delay times.  For example, if the tap length is 1/8th and selection value is 3.5, you will hear a 50/50 mix of the 4/8ths and 5/8ths delays.

Sync Off, Stepped On

The delay tap selection varies continuously, based on Rand Speed, but only one delay tap is selected at a time.

Sync Off, Stepped Off

The delay tap varies continuously at Rand Speed, and a mix of two delay taps will be heard all the time.

The meter and numeric display below the stepped button shows you how these controls interact.  They will show you exactly which delay tap is playing at a given time.  The delay taps are numbered 0 to 7, since I’m a computer programmer ;-)

This chooses a base delay time for the multitap delay.  These are standard musical divisions of time — ¼ note, 1/8th note, dotted 1/8th etc.

Controls the rate of change of the delay taps.  Every ¼ note (for example) a new delay tap is selected at random for the output.

When this is on, the delay time is selected based on the setting of S&H.  When it is off, the delays are switched between continuously at the rate specified by Rand Speed.

Chooses the speed at which the delay selection changes. The numeric value below the knob gives the speed in cycles per second/Herz.

Controls the level of feedback for both the left and right delays.

Controls the amount of the left delay that is fed into the right delay, and vice versa

This site uses Akismet to reduce spam. Learn how your comment data is processed.